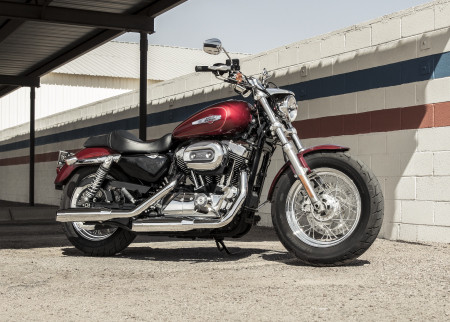 The future of touring is here, and it's a V-Twin! Harley-Davidson®'s new Milwaukee-Eight™ engine is designed to replace the Twin Cam engines that have faithfully served the touring family for the past 15 years. The Milwaukee-Eight™ is engineered with four valves per head, and the unique design allows it to produce more power with lower emissions, better fuel efficiency, and superior heat management. The Milwaukee-Eight™'s power is readily apparent when stacked up against it's predecessors on the road, giving equipped bikes an advantage of around two bike lengths in zero-to-sixty comparisons, and the improvement follows through to the top end, with a similar edge in sixty-to-eighty mph matchups. We can talk about it all day, but if you give Valley Forge Harley-Davidson® a call, we'll schedule you a test ride, and you can feel the difference for yourself!

Harley-Davidson®'s touring line is getting the royal treatment in the 2017 model year! Not only are 2017 touring bikes equipped with the Milwaukee-Eight™ engine, but they've also received a big upgrade to their suspension. The first step was upgrading the pistons of the suspension system to provide even dampening throughout the length of the suspension travel. Additionally, the front end of the bike has been equipped with a Showa® Dual Bending Valve shock for a full 117 mm of travel on standard bikes. The back end of the bike got a huge upgrade as well in the form of a tool free pre-load adjustment system. Just turn the knob and you can tune your rear shock for a passenger, loaded saddlebags, or just tweak your bike to ride the way you want.

If you've got a Harley-Davidson® motorcycle, but want to see it do more, Screamin' Eagle® performance parts are the perfect option for you! Harley-Davidson® now has a full line of Screamin' Eagle® performance parts ready to install on 2017 motorcycles, but you don't need a brand new bike to take advantage of these upgrades! Want to give your Dyna® a boost? Add in a Stage I upgrade and let the engine breathe. Looking to get your SuperLow® really souped up? A Stage IV kit is right up your alley. The new line of Screamin' Eagle® products are EPA compliant in all 50 states, and will fit on Dyna®, Softail®, and Touring bikes from 2007 and on, as well as 2014 and newer Sportster® models.

Your Home for 2017 Harley-Davidson® News and Upgrades