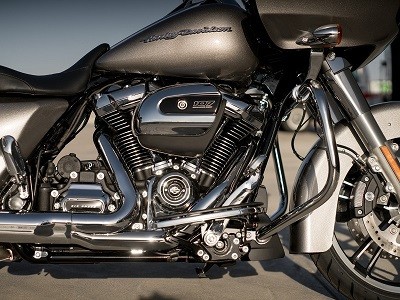 The Milwaukee-Eight™ is a testament to over a century of innovation and engineering at Harley-Davidson®. As the newest big V-Twin engine produced by the company, the Milwaukee-Eight™ has some big shoes to fill. The first Harley® engines were the relatively primitive F-head motors, which soon evolved into the more recognizable Flatheads. The Knucklehead engines followed shortly after, changing the way air cooled engines were designed. The Panhead engines improved on the Knucklehead design, and inspired the Shovelhead engines that came onto the scene in the 1960s. The eighties saw the introduction of the Evolution engine, and at the turn of the millennium the first of the Twin Cam engines roared onto the road. Now the next generation of engine is here, and these motors are better than ever. Meet the Milwaukee-Eight™.

The Milwaukee-Eight™ serves up power like never before! This outstanding motor is designed to provide the heavy Harley-Davidson® touring bikes with more power than ever, and boy does it deliver! Compared to the Twin Cam engine, the new Milwaukee-Eight™ sports an improved power/weight ratio, allowing this motor to get your bike off the line faster, and keep accelerating right up to the red line. The big V-Twin design clocks in at an impressive 107 cubic inches, which will be enough engine for most riders. If you're looking for more, however, we've got the answer for you: The 2017 CVO™ Touring bikes come with a beefed up 114 cubic inch Milwaukee-Eight™, so you've got even more white knuckle power on tap! If that's still not enough V-Twin for you, then bring your Milwaukee-Eight™ 2017 touring bike into our service department and get a Screamin' Eagle™ Stage III upgrade, which will boost your engine up to a whopping 117 cubic inches!

Even with all that power, the Milwaukee-Eight™ still manages to deliver next level performance. This engine runs smoother, cooler, and more efficiently than any other big V-Twin Harley-Davidson® has put on the road. The first step was to build a counterbalancer into the engine, evening out the vibration of a bike at touring speeds and reducing rider fatigue for long hauls. The Milwaukee-Eight™ is also rubber mounted on the 2017 touring motorcycles, adding even smoother operation to your ride. The precision cooling system on the Milwaukee-Eight™ serves to make this the coolest engine Harley-Davidson® has ever produced (pun intended). Targeting the hottest parts of the engine, the precision cooling system leads to a serious reduction in the heat you can feel coming off of your bike, especially when you're rolling along at low speeds. Finally the combination of the Milwaukee-Eight™'s finely tuned electronic fuel injection combined with the eight valve design leads to a marked increase in the engine's efficiency.

Come over to Valley Forge Harley-Davidson® and test ride any one of our 2017 Touring bikes and find out for yourself what makes the Milwaukee-Eight™ the best engine Harley® has accomplished yet. Our dealership is a short ride from Philadelphia, King of Prussia, Pottstown, Phoenixville, and Lancaster.