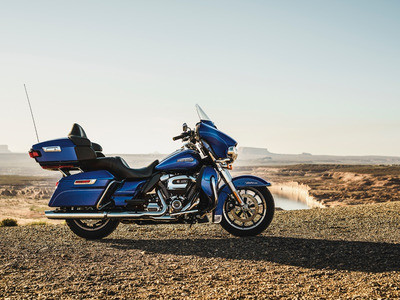 Here at Brian's Valley Forge Harley-Davidson®, we love Harley®'s and we're obsessed with their cruisers and touring bikes, both current and vintage. We've outlined the differences between the two styles of bikes here, but when you're ready to see the differences for yourself, stop by our dealership and showroom in Philadelphia, Pennsylvania. We proudly serve the areas of King of Prussia, Lansdale, Pottstown, Collegeville, and Phoenixville, Pennsylvania, and we can help you find the bike you've been dreaming of.

Cruisers are known for iconic style and power, and throughout their history people have taken these elements to their maximum limits through customization. Many of the customized choppers, bobbers, and baggers you see are built from cruiser frames. These bikes are perfect for cruising around town or taking long weekend rides.

When you want to make a statement with your bike, a cruiser is a great place to start. These bikes are known for strong lines, aggressive stance, and undeniable attitude. Just look at bikes like the Harley-Davidson® Fat Bob or Dyna. The riding stance is often upright or slightly reclined, giving these bikes a distinct profile. This profile is exaggerated by the handlebars, which are often slightly higher than on other bikes and can reach shoulder height.

One of the most important features of any cruiser is power. In the past, American cruisers were based on big bore, air-cooled engines that made highway riding fast and furious. The V-Twin is one of the most iconic engines for cruisers and its two cylinder design provides the right amount of torque, speed, and acceleration.

Throughout the history of cruisers, people have customized their bikes to create new bikes that are even more stylish, more powerful, and better suited for certain types of riding. For example, a rider might strip off as much unnecessary weight as possible, bore out the engine, and create a drag racing bike. They might add saddlebags, a custom seat, and new handlebars and be left with a bagger.

Touring bikes are like cruisers in that they're, brawny bikes with lots of power. But where they depart from the cruiser family is in their specialization. Touring bikes are meant for long rides and their features are mostly centered around this theme.

Crossing the country on a motorcycle requires a lot of supplies, and with a touring bike, you can fit all those supplies into one bike. Touring bikes almost universally feature saddlebags, and many contemporary versions feature top-side cargo boxes or even in-frame storage.

The longer you ride, the more you will feel the specific riding dynamics of your bike such as engine and road vibration, riding posture, and control ergonomics. Touring bikes refine all these elements to make a long ride effortless and comfortable.

While not a universal feature, many touring bikes feature a two-up seat that allows for a second rider on the bike. When you're out on the road for days on end, having a friend along makes a big difference.

Touring bikes and cruising bikes are very similar but not totally identical. While they start with similar types of frames, cruisers typically move in a more customized, muscle bike direction while touring bikes tend go for practicality and ergonomics to suit their purpose. When you're ready to take some of these bikes for a test ride, stop by Brian's Valley Forge Harley-Davidson®. Located in Philadelphia, we proudly serve the areas of King of Prussia, Lansdale, Pottstown, Collegeville, and Phoenixville, Pennsylvania.