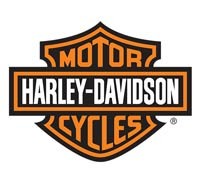 For generations, people who aren't afraid to lead the pack have chosen Harley-Davidson®, and the company stands as a symbol of independence and freedom. Harley-Davidson® has developed one of the most distinct reputations in the industry due to their legacy of innovation and the independent attitude that has driven their development. It all started in a workshop in Milwaukee, Wisconsin, where William S. Harley® and Arthur Davidson developed a new type of engine that could be fixed to pedal bikes to make riding faster and easier. They eventually developed full motorcycles, some of which were used in World War II. The company was only one of two American motorcycle companies to survive the Great Depression. Then, the bikes caught on in popular culture with movie stars and celebrities riding them in famous movies. If one thing became clear throughout their history, it's that Harley-Davidson® bikes are a truly American brand.

Throughout their history, Harley-Davidson® motorcycles have been adopted by customizers and modifiers. Harley®'s always worked well for these purposes because their big, air-cooled engines provided plenty of power and had the sturdy design that could be modified to squeeze out even more torque. They also had strong frames with versatile shapes that worked well when made into a variety of different types of bike such as dirt track racers, choppers, bobbers, baggers, and drag racers. Choppers were one of the most famous adaptations of Harley® bikes and today the term is used to describe a style of highly customized show bike. Back in the day, the term came about because customizers who wanted to get more speed out of their bikes would chop off any unnecessary parts such as trim and decorative features. They'd sometimes even chop off the fenders. The look is extremely popular today, but it's something that came out of Harley-Davidson® riding culture.

Beyond all the cultural reasons to buy a Harley®, there are pragmatic reasons to buy a Harley®, too. One of the big ones is that Harley-Davidson® motorcycles hold their value better than many other bikes. Part of this is because the bikes are well-built and last much longer than other brands. The engines are practically bulletproof, and you don't have to worry about many of the problems that come with age in normal bikes. Another reason they keep their value is that they're valued by collectors and owners. This is especially true for some of the less common models, but these bikes often build nostalgia in their owners that make even used models desirable.

Perks of Being an Owner

Harley-Davidson® has an incredibly active community of owners and collectors, and when you buy your first Harley® you immediately become part of the family. All around the country, you'll find dealerships providing servicing and customization for these bikes. There are also rallies and conventions in cities around the country where riders can meet up. You'll be surprised at how often comment on your Harley®.