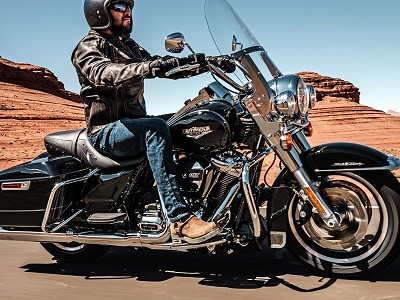 The Purpose of Windshields

Windshields are mostly practical devices and they have two main purposes. One of the main purposes is to buffer the rider from the wind while riding. The faster you ride, the greater the force exerted on your body by the wind. When you're riding at highway speeds, that force can quickly tire you out. If you're riding for days on end, fatigue can be a real problem, which is why most touring bikes have a windshield. The other main purpose for a windshield is to protect from the elements. As you ride, the wind will cause heat to transfer much more quickly, so you will feel the ambient temperature much more strongly (if it's hotter than your body temperature, you'll heat up quickly, if it's colder than your body temperature, you'll cool down in a flash.) The more humidity there is in the air, the stronger this effect is felt. And if it's raining, you can get extremely cold, extremely quickly if you don't have a windshield.

If you've never heard about it before, there's something of a debate over motorcycle windshields. The basic argument centers on whether you can feel the full experience of riding a bike when you have a windshield. Bike design purists often think a windshield ruins the carefully designed aesthetics of the bike and also fundamentally changes the feeling of riding. The pro-windshield crowd often points out that windshields make riding much more comfortable in different weather situations and that a windshield doesn't necessarily hurt the look of the bike. So what's the verdict on the debate? If you want to ride with a windshield, ride with one! If you don't, don't! It's that simple.

A windshield works best if it's set at the right height. Some windshields can be adjusted on the fly, as they are powered by an electric motor. Others are fixed to the frame of the bike and will require tools for adjustment. The ideal windshield height is high enough that air and wind are deflected over your head, but not so high that the frame of the windshield starts to limit your vision of the road. On the other hand, if the windshield is too low, you can experience some wind buffeting against your helmet and you'll lose many of the benefits of having a windshield.

If you are thinking about picking up a windshield for your Harley-Davidson® motorcycle, stop by Valley Forge Harley-Davidson®. We're located near Philadelphia, Pennsylvania, serving King of Prussia, Trooper, Pottstown, Lansdale.